When Tools Become Instruments: Introduction to the Special Issue

Introduction to the special issue When Tools Become Instruments.

There is something about invention in architecture and art that cannot be properly willed, cannot be reduced to a minimum effort for a maximum effect. Almost counter-intuitively, it is through repeated practice that something that was not possible suddenly becomes so. Whether it is addressed in education, practice or research, this poses a particular challenge, because it seems to preclude recourse to any single normative and prescriptive design methodology or pedagogy. If future architects and artists are no longer simply to emulate unquestionably the ‘geniuses’, how can educators, practitioners or researchers work with the technics available today not as tools to be learned, but as instruments with which one cultivates, through repeated practice, a literacy or a mastership?

This question inspired the call for contributions we chaired in 2019 as part of the Scaffolds international symposium organized by ALICE at the École polytechnique fédérale de Lausanne with the support of the C I.II.III.IV. A, the Kanal Centre Pompidou and the participation of several cultural institutions and university departments from Belgium, Switzerland, Austria and Italy, including the Department for Architecture Theory and the Philosophy of Technics (ATTP) at the Vienna University of Technology (TU Wien).

While there is a tendency to associate the artisanal with the ‘analogue’ and the technologically fabricated with the ‘digital’, this association obscures the fact that any technique (or technology) always articulates the continuous (technically, the analogue) and the discrete (technically, the digital) [2]. How can we work analogically with the digital and digitally with the analogue in ways that foster inventive articulations that are as crafty as they are computational? How do we articulate machine intelligence and human intelligence without entirely subjecting one to the other?

Invention does not necessarily require the computer, nor does it require a radical break with the past or with what is already there (what we could refer to as givens–picking up the word data’s etymological root meaning ‘given’ [3]). Forms of externalization (drawings, paintings, texts, etc.), either fabricated with or without the computer, have become the plenitude of such givens, which we colloquially refer to as ‘big data’. How can fundamental availability of data be instrumentalized towards a literacy in the modes of construction, fabrication and dwelling? Such a gesture, we hypothesize, would be less about analytically identifying the elements or logics of that which has been ‘rendered’ (visually, with ‘tools’ in two or three dimensions) than about indexing a milieu of potentiality (the n-dimensional domain of the instruments). It would be less about applying preestablished classifications or rules external to the givens than with instruments with which one can learn to ‘get to know’ the givens while also learning to ‘get to know’ (‘play’) the instrument. How can gaining such a literacy aid in creating the meaningful, the unexpected, the carefully crafted? We call this a literacy because measurement scales are symbolic systems in which, like natural or computational languages, one can be more or less versed [4].

This special issue of Contour journal gathers contributions by five authors who either presented, were invited to present. Their texts can easily stand alone as single articulations. Yet, there are lines developed that cross: When read together, they resonate in unexpected ways.

In The Space Within: Notes on Architectonics on of the Mirror, Riccardo Villa (ATTP, TU Wien) observes that “the mirror is, and has always been, one of the most powerful analogies to explain and investigate thought.” To know is not to possess knowledge, but rather to abstract something from its datum, “to be able to welcome it in its pure form.” The abstraction permitted by the mirror, Villa reminds us, was central for Filippo Brunelleschi’s invention of perspective in the Renaissance and for opening up for architecture a space of speculation and projection. It is a space that both encodes and renders. There is a misconception in our reading of perspective as it appears in computer graphics today, a hiatus as Villa articulates it between what is said and heard, what is seen and what is cast: A space of encoding and invention.

Nick Mols’ (U. Edinburgh) Early Modern Emulation as Contemporary Representation looks at Sebastiano Serlio’s linee occulte as both a “tool-of-doing and an instrument-of-knowing”. His “forensic method discerns processes of architectural drawing by anatomizing the skin of architectural orders in order to understand their skeleton….” By scanning Serlio’s drawings in 3D, Mols seeks to reveal points and lines previously invisible to the human eye. Proportional systems are “dismembered”. The “nature of the point cloud represents the digital copy as an intangible material metaphor of the tangible paper original.” In Mols’ contribution, emulation does not seek to copy or to find a tool to reproduce Serlio with fidelity, but instead works with point clouds harboring the ‘DNA’ by which one can surpass the original.

Diana Cristobal Olave (Princeton) examines the attempt to algorithmize the creative process of designers by the Calculation Center of the University of Madrid (CCUM), founded in the 1960s. In Step-by-step: The Algorithmization of Creativity under Francoist Developmentalism, Olave discusses this interest in formalizing “algorithmic procedures into new forms of inscription” as algorithmic drawing, which exposed and aestheticized the design process, expressing it as a linear sequence of steps. This temporal linearity, Olave remarks, “stands at odds with existing architecture and design historical accounts” of the period, such of Charles and Ray Eames as well as Marshall McLuhan, which highlighted the non-linearity of digital media. In her contribution, Olave looks at how the CCUM’s scientific and aesthetic interest in exposing the ‘logic’ of the design process raises questions for architecture’s contemporary “dream of algorithmic exhaustion”.

“Doesn’t architecture, as also science, appear to be founded upon a—fertile—ambiguity,” Chiappone-Piriou (ATTP, TU Wien) asks in her contribution Uncertainty and Poetic Inhabitation: Or How to Articulate Chance. This ambiguity would not be based on subjective ignorance but, following Henri Poincaré and Jacques Monod, on objective chance. Inverting Laugier’s origin story of the primitive hut, Chiapparone-Piriou challenges his rooting of architecture in an “absolute necessity” asking “what an architectural measure whose necessity rather stems from contingency could be … for our hybrid, physical and digital world, with regard to code?”. How can individual invention keep vivid that which emerges from universality? Is it about affirming the elements and multiplying their combinations? Are all combinations valid? “Architecture can see the contingency of events as the foundation of their transformability—as an invitation to edify within the enclosure of virtualities”.

In Seeing Through: The Diorama and Architectural Design, Adil Bokhari (Digital Architectonics, ETH Zurich) looks to CAD software, combined with machine intelligence, as an opportunity to move beyond “the optimal display of tools and techniques” and instead addresses the screen as a space of play, a “stage that is always lit in the logistics of the digital”. If the “panorama defines the boundaries of play”, the “diorama is the dramatization”. Architects, he observes looking to Alberti, “have always worked with instruments of gauging, of mapping, calibrating, indexing and partitioning”. Faced with large libraries of online 3D models, how can architects used machine-learning to ‘partition’ and ‘calibrate’ such an abundance, in a way that goes beyond engineering and economics-inspired forms of optimization? “A drawing is not the drawing of logistics, but drawing as logistics—stepping out of formal logics”. 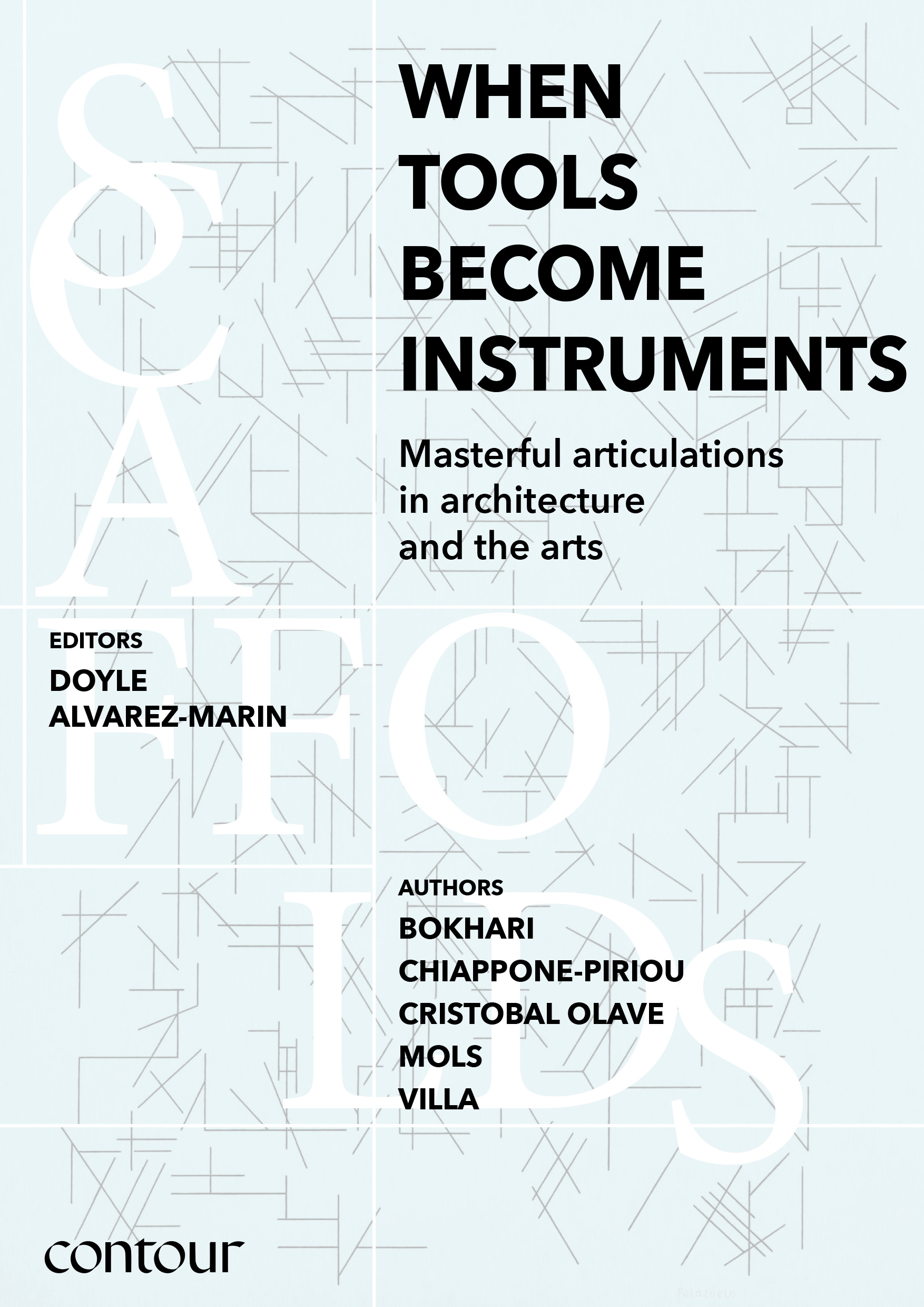