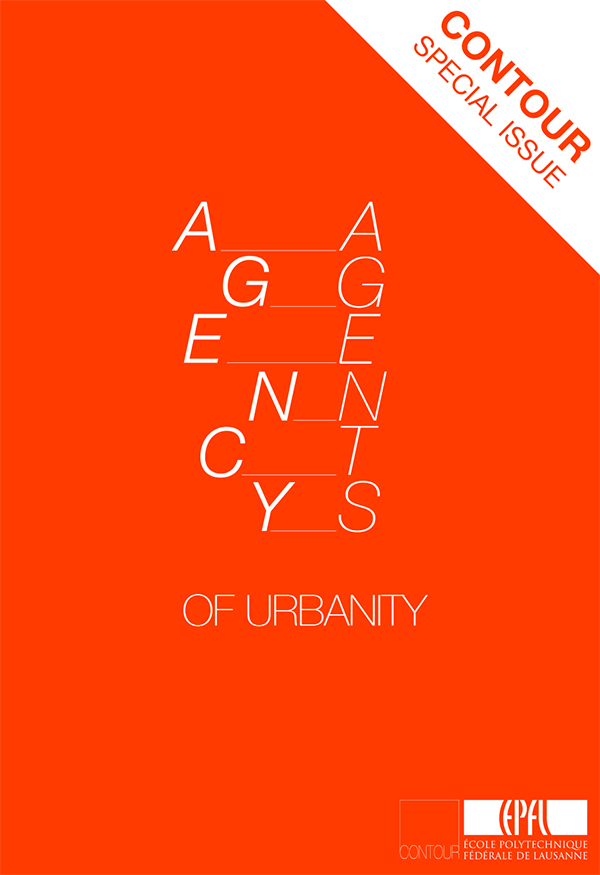 In this Issue of Contour, we had the intention of addressing urbanity by approaching it from one of the most enduring preoccupations of research in human and social sciences—agency. Agency, expressing the capacity to act, is a key concept in understanding urbanity in its problematization of the relation between humans and non-human agents and material and immaterial constraints.

Urbanity is an elusive quality of an urban place. It can be found in an Alpine town and yet be absent from a large American city. It is neither determined by building density, population density nor good design. Urbanity is a quality that emerges from a combination of elements that are greater than its parts. Nothing that contributes to its presence seems to do so intentionally. The failure of many attempts to artificially create urbanity suggests it will remain just out of reach. It is both physical and social, manifest and ephemeral—it cannot be fabricated.

Or can it? A contemporary understanding of agency would suggest that each element both human and non-human that comprises the experienced environment engages passively or actively in creating the emergent phenomena we call urbanity. From the people in physical and digital places to the technologies that mediate their interactions to the sensory qualities of the built and natural environments and the affordances they provide for movement and co-presence, urbanity as contingent and constructed can only be unpacked through the lenses of multiple methods, objects and theories of research.

Urbanity: Looking into the Discourse of Researches

Connecting the Dots: How Digital Culture Is Changing Urban Design

Memory, Projection, and Imagination: On Challenges for Observation and Statistics Based Research

Transit-Oriented Morphologies and Forms of Urban Life: A Case Study

Isar Plan: The Wild As The New Urban?

Connectivity in Action / Form: Non-human Performativity of Wireless Communication and its implicit Architecturality